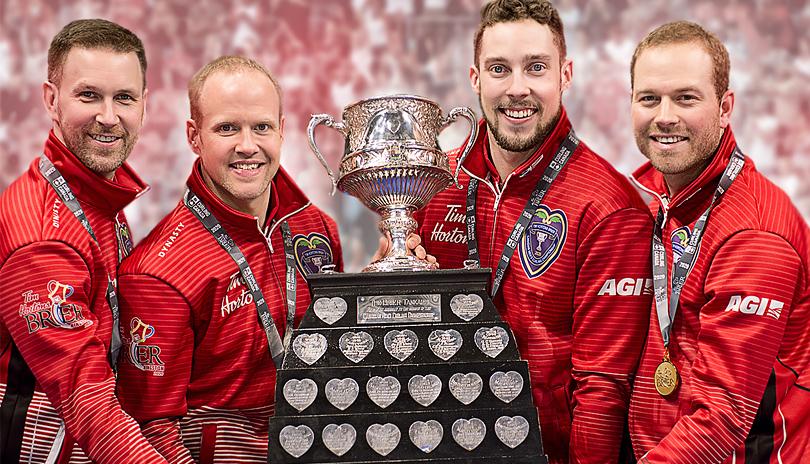 The world’s most famous national men’s curling championship will be making a return to London, Ont.

The 2023 Tim Hortons Brier, presented by AGI, will be played March 3-12 at Budweiser Gardens in downtown London, it was announced today by Curling Canada.

“Our past events in London have been memorable for so many reasons, so it was a pretty easy decision to return based on the superb bid they submitted,” said Katherine Henderson, Chief Executive Officer of Curling Canada. “Budweiser Gardens is a superb building in an ideal location, and we’ve seen repeatedly that London really knows how to put on a show. I can’t wait to be there in 2023!”

London last hosted the Tim Hortons Brier in 2011 when Manitoba’s Jeff Stoughton and his team from Winnipeg hoisted the Brier Tankard after defeating home-province hopeful Team Glenn Howard in the gold-medal game.

“On behalf of the N’Amerind Friendship Centre members, clients, staff and the Board of Directors, I’m pleased to extend a welcome to the 2023 Tim Hortons Brier curlers, coaches, families and fans who will be in London,” said Brian Hill, President of the N’Amerind Friendship Centre. “Indigenous Peoples have lived in and shared the land now known as southwestern Ontario for thousands of years. The Urban Indigenous People of London are enthusiastic that London has been chosen to host a major sporting event. We look forward to our region being a host to more large gatherings and special events such as the 2023 Tim Hortons Brier.”

“The 2011 Brier is forever remembered as one of the most memorable times in the history of our city,” added London Mayor Ed Holder. “Our community rallied around that event, and came together as we welcomed curling fans from across Canada to London and showcased our great city. With sold-out crowds, and a legion of passionate volunteers, it left a mark on our community that is still felt and talked about today. As remarkable as that event was, I have no doubt the 2023 Tim Hortons Brier will be even better as London sets a new gold standard for host city excellence.”

Budweiser Gardens seats around 9,000 fans and is the home to the Ontario Hockey League’s London Knights. The arena also played host to that 2011 Tim Hortons Brier in addition to the 2006 Scotties Tournament of Hearts.

It will be the third time the Canadian men’s championship has been contested in London; the 1974 Macdonald Brier, won by Alberta’s Hec Gervais, was played at the old London Gardens.

London’s history with major curling events is a rich one; the city has hosted highly successful editions of the Continental Cup of Curling in 2020 and 2018, as well as the 1981 World Men’s Championship.

“On behalf of the Government of Ontario, it gives me great pleasure to congratulate the City of London for its successful bid, and welcome the return of the Tim Hortons Brier in 2023,” said Lisa MacLeod, Minister of Heritage, Sport, Tourism and Culture Industries. “London has a long history of hosting many successful national-level events, including the Brier itself, and I am confident the city will serve as an excellent host — setting a high standard for future hosts of these championships. I encourage Ontarians of all ages to cheer on Canada’s best curlers, right here at home.”

The Tim Hortons Brier has been staged in Ontario on 31 occasions, the most of any Canadian province or territory — most recently in Kingston in 2020, where Team Brad Gushue, representing Newfoundland/Labrador, came out on top.

Ten teams representing Ontario have won the Brier, most recently skipped by Glenn Howard in 2012 and 2007.

“It’s always a thrill to bring national curling championships to our province, and considering the way London has stepped up in the past, I expect that players and fans will enjoy a great experience in 2023,” said Stephen Chenier, Executive-Director of CurlON. “London’s curling community is extremely supportive and active, and I couldn’t be happier for them to have this opportunity to play host to the Tim Hortons Brier.”

The winner of the 2023 Tim Hortons Brier will represent Canada a month later at the World Men’s Curling Championship April 1-9 in a Canadian city to be named later this year. Additionally, the winning team will return to defend its title as Team Canada at the 2024 Tim Hortons Brier.

“We couldn’t be prouder to welcome the Tim Hortons Brier back to London in 2023,” said Peter Inch, who along with Ted Smith and Ken Schofield will serve as London host committee vice-chairs. “Thank you to Tourism London for all their work and support with the bid. We now have a lot of hard work in front of us to get ready, but we have a dedicated group of volunteers who know the ropes, and we are going to do what it takes to put on a great show.”

Full event ticket packages are on sale now. Customers are encouraged to sign up for Curling Canada’s e-newsletter at curling.ca to receive more information.

Volunteer opportunities also will be available later this year. Go to curling.ca/volunteer to sign up to receive updates on volunteering for the 2023 Tim Hortons Brier

The Brier has been played in 31 cities across Canada (Lethbridge will make it 32), from Victoria to St. John’s. Teams from Alberta have won 29 times, followed by Manitoba with 27 titles. New Brunswick, Prince Edward Island, the Yukon, Northwest Territories and Nunavut have yet to win.

TSN/RDS2, the official broadcast partner of Curling Canada’s Season of Champions, will televise all of the action from London.