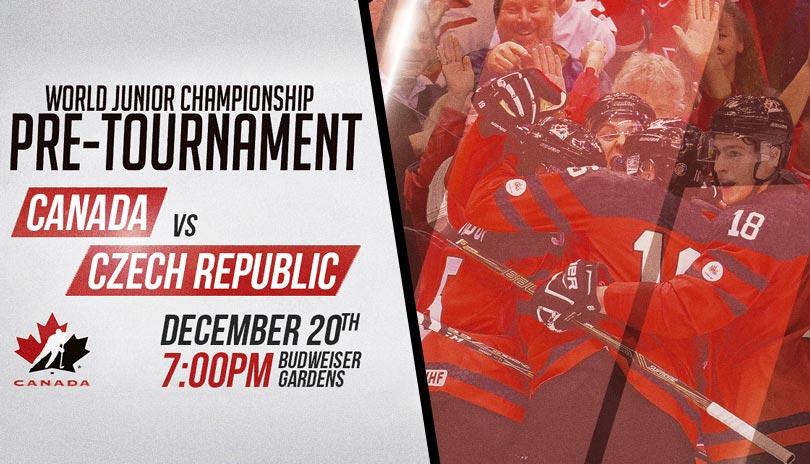 Canada’s National Junior Team hopefuls will be front-and-centre in Southern Ontario as St. Catharines, Ont., will serve as the host city for this year’s selection camp, December 12-15.

Canada’s National Junior Team Sport Chek Selection Camp will be held at the Meridian Centre, the home of the Ontario Hockey League’s (OHL) Niagara Ice Dogs, and will also feature a trio of games - two against a team comprised of U Sports all-stars on Dec. 13 and 14, and a game against Denmark on Dec. 15, before the roster is pared down to the group that will wear the red-and-white in Buffalo Dec. 26-Jan. 5. Tickets will go on sale later in October for fans in the Niagara Region.

The Canadian squad will make its final preparations ahead of the 2018 IIHF World Junior Championship in Buffalo, N.Y., with a pair of pre-tournament games. On Dec.20, Canada will face the Czech Republic at Budweiser Gardens with tickets going on sale, Wed. October 18th at 10am through www.budweisergardens.com.

Beginning Wednesday, Oct. 11 at 10 a.m. ET, tickets to the Dec. 22 Canada-Switzerland match-up in Hamilton’s First Ontario Place will be available for purchase at Ticketmaster.ca, by phone at 905.529.8500 (regular and special group sales), and at the Dan Lawrie Insurance Box Office

“Beginning with our World Junior Summer Showcase in Plymouth, through our selection camp and pre-tournament games in December, we have positioned ourselves to evaluate and bring together the top Canadian talent to represent our country and compete in Buffalo,” said Shawn Bullock, Hockey Canada’s senior manager, hockey operations/men’s national teams. “We’re looking forward to staging in St. Catharines, London, and Hamilton before making our way to New York State to open this year’s World Junior Championship.”

Following the camp and the selection of the 22-player roster, all eyes will turn to the 2018 World Juniors where Team Canada will be in search of its 16th overall gold-medal, and first since celebrating on home ice in Toronto in 2015.

Canada’s quest for gold in Buffalo begins on Boxing Day against Finland at 4 p.m. ET. Canada and the U.S. will resume their cross-border rivalry on Dec. 29 when, for the first time in the history of the IIHF World Junior Championship, teams will take to an outdoor rink in preliminary-round action. The hockey powerhouses will play at 3 p.m. ET at New Era Field in Orchard Park, New York, home of the NFL’s Buffalo Bills. The game also marks their first meeting since the gold-medal game at the 2017 World Junior Championship in Montreal.

TSN and RDS, the official broadcasters of Hockey Canada, will once again provide wall-to-wall game coverage and analysis throughout the tournament, including Canada’s two pre-tournament games; check local listings for details.