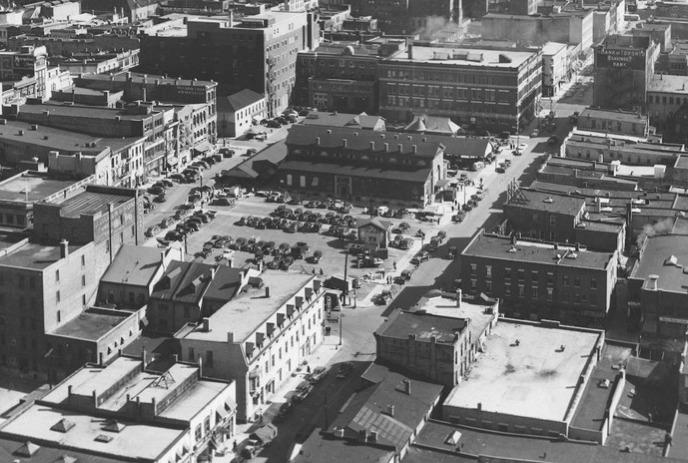 On June 15, 1919, London photographer Arthur A. Gleason (1877-1964) boarded a Curtis “Jenny” airplane to take his first aerial photographs. He would go on to take hundreds more in his decades-long career as a commercial and news photographer.

Thrill features 25 of his aerial photographs which depict London and other southwestern Ontario communities from the early 1940s through to the early 1960s. Each image is a large-scale reproduction of a much smaller print in Museum London’s material culture collection.

Over the years, Gleason used several different cameras to capture his images. He began with a 5 x 7 Graflex, but its shutter speed proved too slow for aerial work. A 4 x 5 Graphic did good work but his last camera, a Fairchild K-20, was even better. This model had been used by the American Air Force during the Second World War (1939-1945).

Gleason and the pilot would first discuss the assignment’s objectives and once in the air, the pilot approached a town at about 1000 feet elevation. Gleason looked at the town, decided the best direction from which to shoot, and then the pilot dropped to about 500 feet for Gleason to snap pictures. Still lower, at about 300 feet, he captured closer views of specific buildings.

Gleason enjoyed the adventure and challenge of capturing these images, once saying, “aerials give me a thrill!” As for his audiences, they delighted in poring over them. Many had never seen their communities from this unique perspective. Today, satellites and Google Earth have reduced some of the novelty of aerial photography. But by showing us landscapes that have undergone sweeping transformation since Gleason took these images, they still have the power to thrill and fascinate.