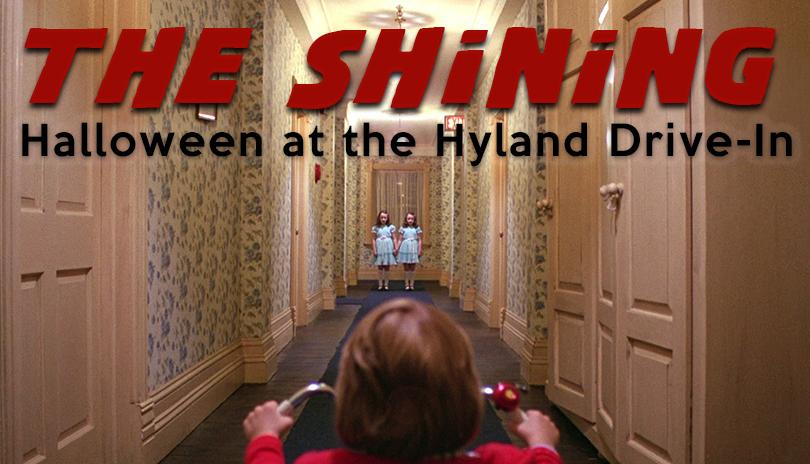 Enjoy a Fun & Safe Drive-In Halloween Night at The Hyland Drive-in
Concessions delivered to the car by your favourite ghouls!
Order you favourite Halloween treats!
Spooky times ahead!

Jack Torrance accepts a caretaker job at the Overlook Hotel, where he, along with his wife Wendy and their son Danny, must live isolated from the rest of the world for the winter. But they aren’t prepared for the madness that lurks within.

Opening with spectacular aerial shots of a beautiful, mountainous landscape, Stanley Kubrick's horror classic THE SHINING sucks the viewer into his frightening tale with quiet, relaxing visuals--but the ominous soundtrack warns that all is not right at the gorgeous Overlook Hotel. Based on Stephen King's best-selling novel, the film stars Jack Nicholson at his eyebrow-raising best in his portrayal of Jack Torrance, a Vermont schoolteacher working at the Overlook as a winter caretaker. The glorious early-20th century resort only operates in warm weather because the snowy roads deny access in the colder months, so Jack brings his wife, Wendy (Shelley Duvall), with him, as well as his young son, Danny (Danny Lloyd), who possesses some unique psychic powers. As the Torrances settle in for the long, lonely months ahead, strange, unexplainable things start occurring in the hotel--and in every scene Jack seems to be growing a little more evil and dangerous.... Cinematographer John Alcott (who also worked on BARRY LYNDON and A CLOCKWORK ORANGE) allows his Steadicam to float eerily through the deserted halls and corridors of the hotel, creating a creepy air of tension as Jack plummets into madness. Kubrick's obsessive eye for detail is prevalent throughout; the famous scene where Danny rides his toy buggy through the hotel is remarkable for Alcott's gliding camerawork and the desolate sound of the wheels alternately scraping across the hardwood and carpeted floors. Nicholson and Duvall are outstanding throughout, with both actors running the full gamut of human emotions as the film races towards a thrilling conclusion. Supplemented by an oddball cast of dead twin girls, suicidal ax-murdering ghosts, Scatman Crothers as the hotel cook, and many other weird and wonderful figures, Kubrick's film is a pulse-racing treat that is among the best in his inimitable body of work.