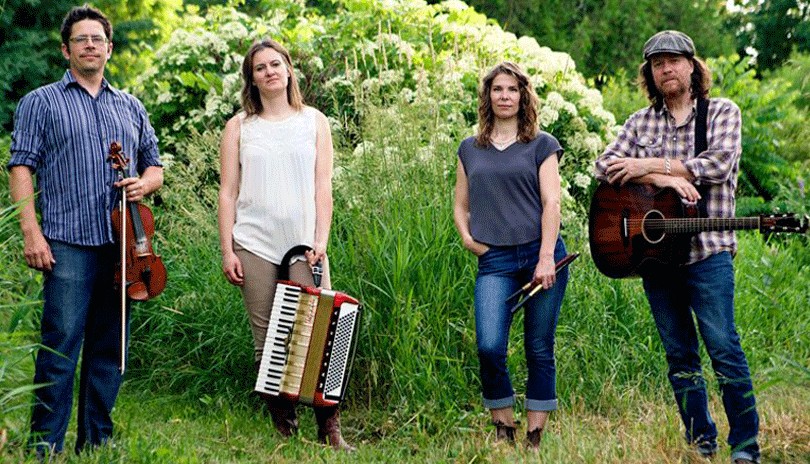 The tale of The Bookends begins in the storybook town of Stratford, Ontario where wafting notes of an Irish whistle brought together two couples on a warm summer’s eve. This perfect pairing of Cait & Pete, and Miriam & Errol – with a shelf-full of stories between them, became The Bookends. They are Celtic instrumentalists who keep audiences of all ages spellbound or fast-footed with their masterful arrangements. Filled with good natured banter, fascinating footnotes, and a steady switching of instruments, The Bookends deliver a show of energetic enrichment, and fantastically frenzied fun.

The Bookends have performed as the backing band for multi-platinum international sensation Loreena McKennitt. In 2021 they were headlined in the gold-standard of Canada’s festival scene: the Goderich Celtic Roots Festival. Also in 2021 they began a performance and collaboration relationship with the renowned Stratford Symphony Orchestra and were, fittingly, featured in a book – Just Us Folk – We Shift and Remain, by legendary journalist Jan Vanderhorst. In their 2019 jaunt to Ireland, the group played with artists from several Celtic supergroups, including Lúnasa, Kilfenora Céilí Band and Cherish the Ladies.

The Bookends released their first album, “Chapter One” in 2020. Roots Magazine Canada marveled that The Bookends “think outside the box” in their music and album promotion – crediting them with boosting the local economy during the pandemic lockdowns of 2020. The album has enjoyed airplay on radio and popular podcasts.