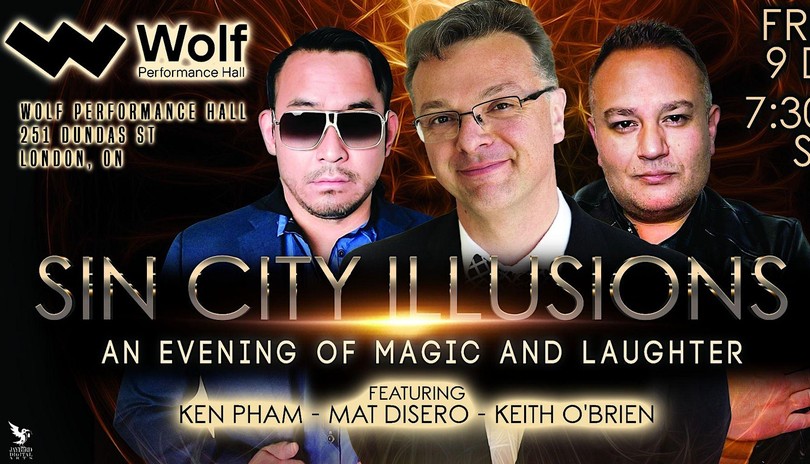 Sin City Illusions - An Evening of Magic and Mystery

A hilariously amazing evening with 3 of Ontario's finest magicians.

Come join us for a hilariously amazing night of magic and illusions, featuring 3 of Ontario's finest magicians. This includes Penn and Teller's Matt Disero, Ken Margoe from Illusionarium, and London magician Keith O'Brien.

You'll be treated to laughs, magical trickery, amazing illusions, and mind blowing mentalism. Tickets are just $19 for general admission seats. This is a one night only event in London, so get your tickets before they are gone!

Your performers are:
Keith O'Brien: Our featured performer is the President of the London Magicians Guild, and is one of the premier magicians in all of Ontario. His Las Vegas style show is funny, mesmerizing, and all together incredible. You're going to love London's very own Keith O'Brien!

Matt Disero: One of Toronto's most sought after magicians, Matt has worked with comedy greats such as Drew Carey & Jerry Seinfeld. He has starred on Penn and Teller's Fool Us, and has headlined shows at the world famous Magic Castle in Hollywood, California. He has performed at exotic locales such as Tokyo, Italy, London, Cypress, Australia, United States. We are VERY lucky to have him on our show, and you'll see why!

Ken Pham: With a large following and over 10 million views on social media, Ken has taken his act from behind the screen to the live stage with much fanfare. He's performed at sold out venues such as The Rec Room, Showtime Comedy, The Royal Comedy Theatre, and Meridian Centrepointe Theatres. His act involves mentalism, magical stage props, and a whole lot of laughter.

This is guaranteed to be a fun and incredible evening for the whole family. See you there!