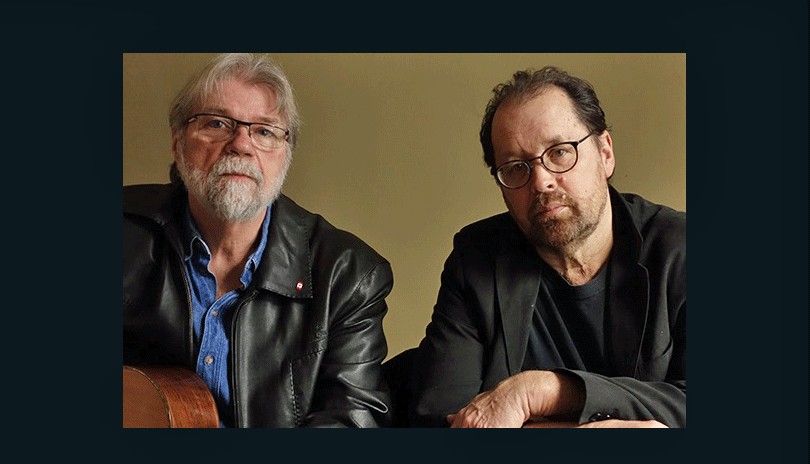 Paul Langille & Paul Sims present "Blue Valentines #4" This continues the tradition of “Blue Valentines” concerts after a 2 year interruption due to the pandemic. There will be more songs about love and its trials and tribulations along with Paul's usual self-deprecating humour.

“It’s not a schmaltzy, sucky, syrupy Valentine’s Day,” said Langille. “It’s for all the people who’ve been around the block once or twice. We’re not taking the romance out of it, romantic songs are speaking from the heart, but the heart gets a little side-tracked. The poetic, romantic is not reality. What you read in a card or a song isn’t really true — the ‘I can’t live without you.’ Well, you can. I think there’s some humour to be found in it. There’s a demographic of people who feel Valentine’s is a tad overdone.” The playlist includes Langille’s own compositions but also a handful of covers. He expects plenty of audience interaction as people join in on the chorus of their favourite tunes. “They are about love, but not all saccharin,” Langille said. “They’re not all hurtin’ songs. It’s all done tongue-in-cheek so it’s not a sad night.”

These days a musician and artist must utilize all the voices available to him. Paul has many voices, all emanating from the heart and soul. Here are some of Paul’s strongest assets … An emotionally charged voice – A proven history as a guitar-smith with powerful and experienced song writing skills – A man with an honest passion for his music.

Over the years, Paul Langille has won numerous accolades and awards, including the prestigious AMPAC (Advertising Music Producers Association of Canada) award for 1986 and was nominated for the COCA (Canadian Organization of Campus Activities)Top Contemporary Artist of the Year award, 1988. In recent years, Paul has been nominated 8 times in the Singer/Songwriter and the Blues category at the Jack Richardson London Music Awards (now known as the Forest City London Music Awards). He was also nominated 11 times for the London Music Awards in various categories. In 2008, Paul won the Forest City London Music Award for best Contemporary Singer/Songwriter. Paul's recording "Pine & Locke" pays homage to his hometown of Hamilton, Ontario. His latest recording is "Live at the Princess Avenue Playhouse" and is available from www.paullangille.com.