Lighting of the Lights 2022 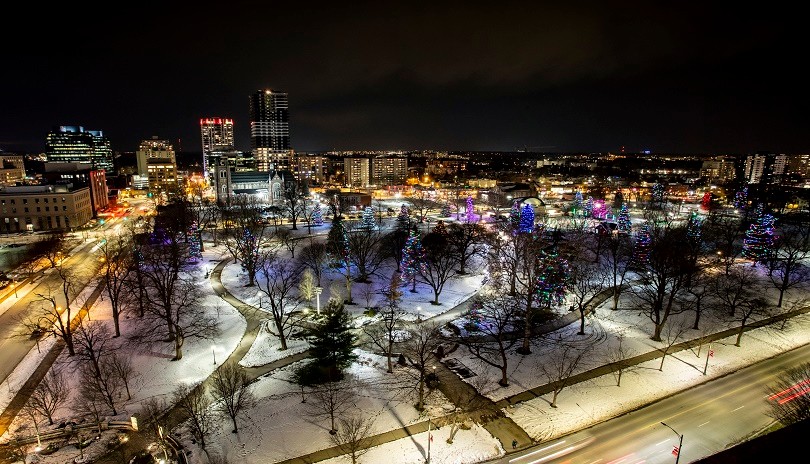 The City invites Londoners to ring in the holiday season with the annual Lighting of the Lights at Victoria Park on Friday, December 2, 2022. Live entertainment begins at 6:15 p.m. followed by the countdown to the spectacular illumination of the entire park at 6:50 p.m.

Starting Friday, December 2 at 6:50 p.m., Victoria Park will transform into a Winter Wonderland, with over 75,000 lights illuminating the park nightly from 5 p.m. to 11 p.m. until the end of February. There will also be a variety of other displays in the park, including Santa and his reindeer, the Christmas train and the snowmen family. Santa's Mailbox will also be on-site for all the children who need to mail their wish list to the North Pole.

The City Hall observation deck will reopen for public viewing of Lighting of the Lights and the Winter Wonderland in Victoria Park during the following dates and times:

Washrooms in Victoria Park will be open daily from 9 a.m. to 9 p.m. at the Kiwanis Memorial Bandshell throughout the holiday season.

Following the Lighting of the Lights, Londoners are encouraged to visit the Covent Garden Market for their Holly Jolly Market, taking place until 10 p.m. on Friday, December 2. Enjoy local artisan and food vendors, live music and entertainment, light displays, a hot chocolate station and cozy fire pits as you gaze at the beautiful Christmas tree in the centre of Rotary Square.

Downtown for the Holidays

It will be a December to remember in downtown London, with large-scale events including the Holly Jolly Market, Lighting of the Lights and New Year’s Eve in the Park as well as small-scale activations including musical performances and art crawls taking place throughout December. Visit Downtown for the Holidays to learn more about upcoming holiday events.