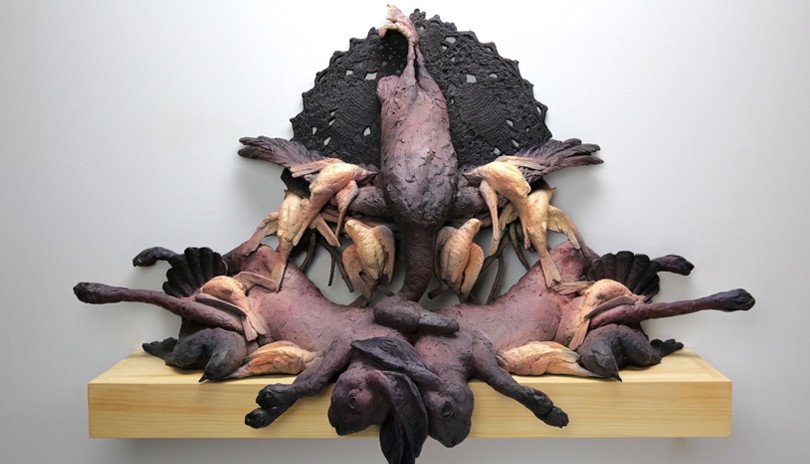 Hunter Gatherer is a meditation on the complex network of relationships between hunting and collecting in the context of the museum. With an emphasis on representations of the animal body, artists Nicholas Crombach, Emily Jan, Philippa Jones, and Meryl McMaster consider this dynamic from art historical and postcolonial perspectives. The exhibition creates points of intersection through references to sport hunting; acquisition, power, and dominance; decadence and excess; still life and vanitas painting; and institutional critique. Depictions of the hunted animal body are common throughout art history – particularly during the seventeenth, eighteenth, and nineteenth centuries – and are closely linked to the human desire to control nature. In addition, many of the taxidermy animals held in museum collections were acquired through hunting. This occurred during a period of intense development of natural history collections, which mirrored an era of colonial expansion. Hunting in the colonies was viewed as both sport and scientific pursuit, and many hunters justified their killing by claiming an interest in scholarly pursuits and in acquiring specimens for scientific collections. Some of these hunted animals came to form the basis of collections in natural history museums. Such collections are now subject to a rethinking and re-evaluating of their value and meaning, given that they can be perceived as metonymic to the colonial project itself. The work in this exhibition encourages us to reflect on past and present relationships with animals in an age when we are increasingly attuned to the notion of interspecies relations and kinship.

Throughout his practice, Nicholas Crombach explores human-animal relationships, seamlessly combining animal imagery, art historical references, and material culture. The works in this exhibition integrate references to game paintings, hunting trophies, heraldry, and Victorian architectural ornamentation with a critique of deeply entrenched power structures. Juxtaposing images of dogs and dead animals – the hunter and the hunted – Crombach questions not only the hierarchies between humans and animals, but also the ongoing legacies that carry over from colonialism. Emily Jan’s After the Hunt (2014) reimagines Franz Snijders painting Still Life with a Roe Deer (c. 1630) in the form of a textile-based installation. The spoils of the hunt are assembled here in felt and found objects – a boar’s head and the suspended body of a roe deer is meticulously recreated, juxtaposed against decaying fruit, flowers, and various tropes associated with seventeenth century Dutch still life. Jan critiques the imagery associated with the genre of the post-hunt tableau – each luxurious object functioning as a reminder of the excesses, exploitation, and violence of colonialism, as well as a reminder us of the transience of existence. Philippa Jones presents three monumental drawings of moose necropsies, disrupting the notion of the grotesque by revealing the beauty previously hidden below the surface of the skin. These drawings are exquisite depictions of the aftermath of a moose hunt in Newfoundland, an event that reminds us of the interrelationship of death, consumption, and sustenance. Created in an attempt to come to terms with the death of a close friend, one of the drawings also subtly references Caravaggio’s Incredulity of Saint Thomas (1601-1602), fingers delicately probing flesh, seeking explanations and solace in the bodies of the dead. Meryl McMaster has created three multimedia works in response to the nineteenth century bell jars containing taxidermied birds, held in the collection of the McCord Museum in Montreal. Combining photography, video, and sculpture, McMaster questions the desire to capture and preserve animal specimens in an attempt to freeze their bodies in time. Furthermore, she draws parallels between this mode of representing animal specimens to the way in which Indigenous peoples have been portrayed in ethnographic museums wherein Indigenous people and nature were both viewed as something to be tamed and domesticated.

Helen Gregory extends her gratitude to research assistant Megan Godard for her help with this project.

McIntosh Gallery is open to the public. Western staff, faculty and current students will be asked to present their OneCard upon entry. All other visitors are required to have been vaccinated and have one booster shot (generally, three doses in total) of any combination of COVID-19 vaccines recognized by Health Canada.?

If you have questions or are seeking additional information about visiting the gallery, feel free to reach out to us at mcintoshgallery@uwo.ca. For ongoing coverage of COVID-19 protocol and operations at Western University, visit https://www.uwo.ca/coronavirus/