Dierks Bentley - Beers On Me Tour 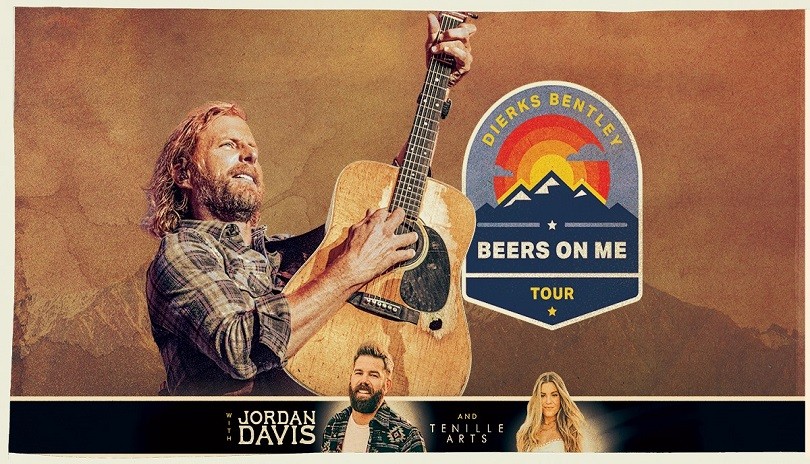 Multi-Platinum singer/songwriter Dierks Bentley announces details today behind the winter run of his 2022 BEERS ON ME TOUR.  After wrapping the first leg this past weekend that "kept the audience on a collective high", Bentley will continue that momentum with a 21-city run launching Jan. 6th in London, ON. The tour will include openers Jordan Davis along with Tenille Arts.

"People think we are crazy to go to Canada and the Northwest in January, but we’ve learned from previous tours that it’s a great time to bring a party up there,” Bentley said. “For me personally, I don’t mind that there is plenty of ice, snow, and mountains for some adventure between shows.”

Also launching today is the official music video for the single by the same name. Bentley, HARDY and BRELAND ambushed unsuspecting bystanders across Nashville with free beer and plenty of high fives and selfies. To watch the feel-good music video for "Beers On Me" click here: https://umgn.us/BeersOnMeMusicVideoPR

Dierks Bentley continues to be a dominant voice for the genre with over 6.4 billion streams and 20 No. One hits, while his new single “Beers On Me” with BRELAND and HARDY races up the radio charts. Reaching a new creative high while “making music designed to challenge” (New York Times), Bentley co-wrote 10 of 13 tracks on his latest full-length release THE MOUNTAIN, which earned him the highest debut sales of his career and became his seventh chart-topping release. This summer, Bentley’s surprise LIVE FROM TELLURIDE collection was touted as "a gift that Country music fans didn't know they needed" (The Tennesseean). Having amassed countless nominations from the ACM's, CMA's, Billboard Music Awards and more while also earning 14 GRAMMY nominations, Bentley also celebrated his 15-year anniversary as a member of the Grand Ole Opry. He also created professional endeavors outside of the music with his Flag & Anthem lifestyle collection Desert Son, along with his “Dierks Bentley’s Whiskey Row” franchise hosting four locations. For more information, visit Dierks.com.