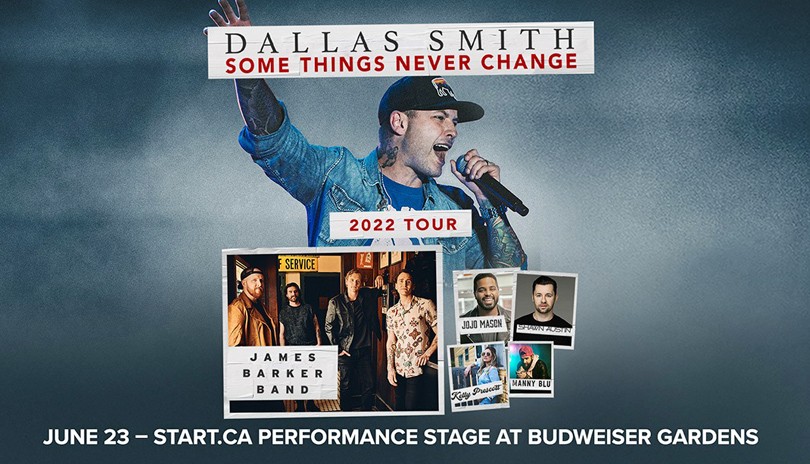 Multi-Platinum award winning country star Dallas Smith has announced the details for his long-awaited return to the road with the 2022 Some Things Never Change Tour kicking off in May. The reigning CCMA Awards Entertainer of the Year also shared the exciting news that he will premiere his brand-new single “Hide From A Broken Heart” (Big Loud), with a special performance during the 2021 CCMA Awards on November 29. Written by Mark Holman, Lauren LaRue, Ernest Keith Smith and Geoff Warburton and produced by Joey Moi, the global digital release of “Hide From A Broken Heart” and official video premiere will drop at 8pm ET on November 29, followed by the international radio release (Canada, Australia, UK, Germany) at 8:15pm ET.

The Some Things Never Change Tour 2022 with James Barker Band and special guest Meghan Patrick plus emerging country artists Shawn Austin, JoJo Mason, Kelly Prescott, and Manny Blu will kick off May 24 in Brandon, MB, and head to over 20 cities including Winnipeg, Saskatoon, Regina, Calgary, Halifax, Kitchener, London, Ottawa and more before wrapping at Budweiser Stage in Toronto, where Smith last performed in 2019 in front of a sold-out crowd of 14,000+. $2.50 will be added to the cost of each ticket to go towards Canadian mental health charities and services, on behalf of the Lifted Dallas Smith Charitable Foundation - a non-profit organization committed to ensuring that mental health services are accessible to anyone and everyone in need.