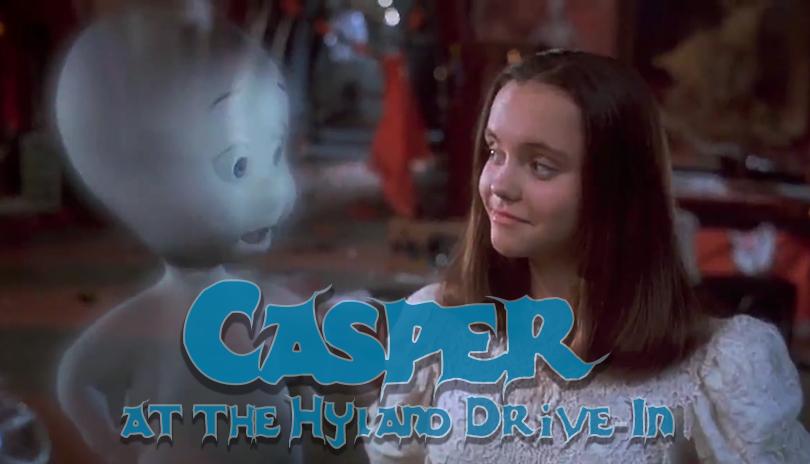 Enjoy a Fun & Safe Drive-In Halloween Night at The Hyland Drive-in
Concessions delivered to the car by your favourite ghouls!
Order you favourite Halloween treats!
Dress-up & send us a picture - we'll make you a star in our Halloween pre-show before Casper is shown.
Spooky times ahead!

Furious that her late father only willed her his gloomy-looking mansion rather than his millions, Carrigan Crittenden is ready to burn the place to the ground when she discovers a map to a treasure hidden in the house. But when she enters the rickety mansion to seek her claim, she is frightened away by a wicked wave of ghosts. Determined to get her hands on this hidden fortune, she hires afterlife therapist Dr. James Harvey to exorcise the ghosts from the mansion. Harvey and his daughter Kat move in, and soon Kat meets Casper, the ghost of a young boy who’s “the friendliest ghost you know.” But not so friendly are Casper’s uncles–Stretch, Fatso and Stinkie–who are determined to drive all “fleshies” away.

"Lonely guy he may be, but the incorporeal, 'living-impaired' kid of the title occupies a haunted manor like Xanadu, remodelled by Gaudi in expansive mood. The set design, however, merely disguises what is in fact an intimate and likeable picture. As a part-animated live-action movie, it harks back to less frenetic kids' fare from the '60s like Bedknobs and Broomsticks, rather than, say, the 'toon-laden Roger Rabbit. In fact, despite the sophistication of the computer-generated special effects, Casper and the house's three ghostly stooges are the only non-'fleshies'; for the rest, the priest's neck twists Death Becomes Her-style, there's some gentle fun with objects (coffee poured horizontally), and whirlwinds released by screams. The plot's perfunctory: Casper's a lonely channel-hopper who falls for the daughter (Ricci) of ghost therapist Dr Harvey (a winning, soft-centred Pullman), who's employed to exorcise the house - which contains treasure - by scheming Carrigan (Moriarty) and her dozy helpmate Dibs (Idle, playing his usual annoying English twit)." - Time Out