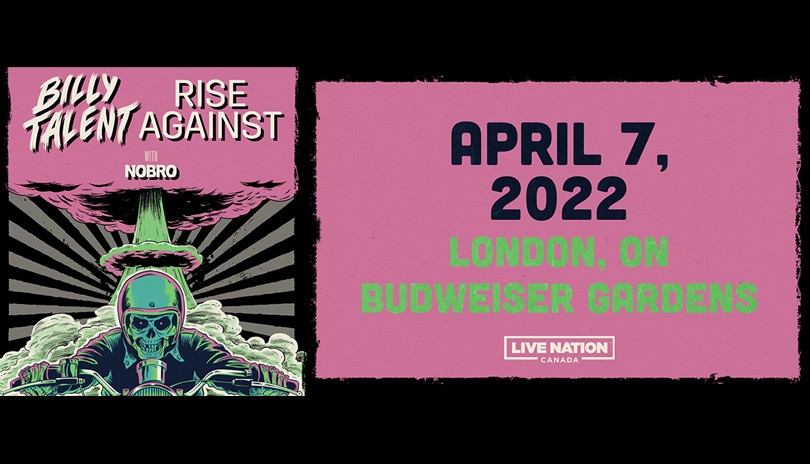 Canadian rockers BILLY TALENT will begin 2022 on a high note by returning to the stage for an incredible national Canadian tour.  The 10-date tour will consist of two legs; the first brings the band to the West Coast, while the second leg will see the band co-headline a run of 5 dates with fellow punk rockers RISE AGAINST.

In addition to being available digitally, on CD and on Vinyl LP, a special limited-edition Deluxe Vinyl Package of the new album is available for pre-order. A multi-channel Dolby Atmos mix of the album will also be available digitally. Pre-order/Pre-Save CRISIS OF FAITH here.

Earlier today, the band dropped a music video for “End of Me (feat. Rivers Cuomo” that was created by UK video artist, Liam Lynch, who played all of the characters in the video.

On Rise Against's new album Nowhere Generation, released June 4th via Loma Vista Recordings, the multi-Gold and Platinum band draw a line in the sand with its blazing and aggressive punk rock and lyrics that shine a spotlight on the social and economical deck that has been stacked against our younger generations’ pursuit of The American Dream. The album debuted at the top of multiple Billboard charts with its first week sales (#1 on Rock, #3 on Top Current Albums, #3 on Vinyl, and the Top 40 of the Top 200), and the title track lead single earned the Chicago-based band their first #1 spot at Rock radio in the U.S. Nowhere Generation has earned praise and acclaim via Revolver, Consequence, LoudWire, Brooklyn Vegan, Grammy.com, Kerrang!, American Songwriter, The Line of Best Fit, Clash, and more.

Billy Talent are one of Canada’s most successful bands.  They have sold nearly one million albums in Canada alone and nearly 3 million albums internationally.  They have won 7 Juno Awards and have been nominated 23 times, including three nods for their most recent studio album Afraid of Heights (Group of the Year, Rock Album of the Year, and Ian D’Sa for Producer of the Year). They have also been nominated for 32 MMVA Awards – taking home the prize 10 times.  In 2018 the group was honoured with the Legends of Live Special Achievement Award, presented by Canadian Music Week.  Most recently, Billy Talent have launched the Billy Talent Charitable Trust to give more back to the organizations that the band supports.

NOBRO, who cut their teeth on the road with bands like FIDLAR and PUP, are joining for both legs of the cross Canada tour.