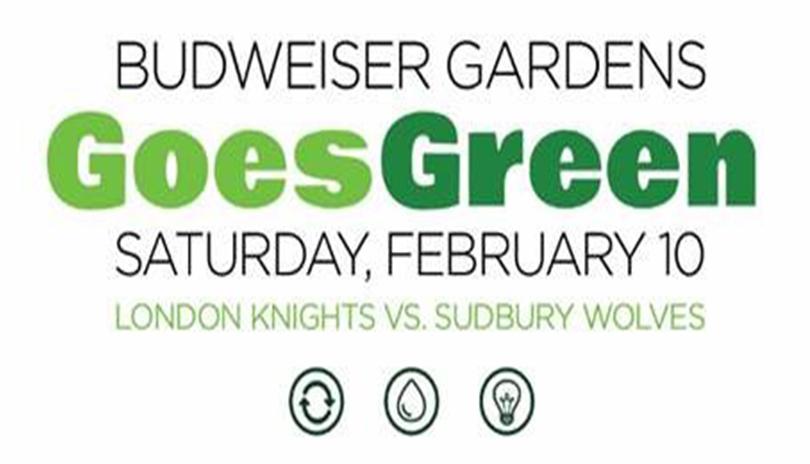 On Saturday, February 10th the Spectra Venue Management team at Budweiser Gardens will launch its first ‘Green’ event when the London Knights face off against the Sudbury Wolves.

“Over the last year, there has been a conscious effort by our team at Budweiser Gardens to evaluate our practices and procedures and look for ways that we can implement environmentally responsible practices.” Said Brian Ohl, General Manager of Budweiser Gardens. “This game will give us a great opportunity to share with the community some of the significant work that has been done and it is our hope that this will become an annual game while also adding additional Green events where possible.”

Spectra Venue Management has teamed up with the London Transit Commission to offer fans coming to the game the opportunity to ride on LTC busses for FREE beginning at 5pm and running through the end of service. Each fan will need to present a valid ticket for that night’s game to gain entry onto the bus. “We are grateful that the LTC has stepped up to work with us on this great initiative and provide the 9.000 plus fans coming for the game the opportunity to ride free of charge and reduce carbon emissions” said Ohl.

Each save that the Knight’s goaltender makes during the game will count beyond just the scoreboard as Spectra and ReForest London will launch the ‘Saves for Trees’ program at the game. For every save that a Knight’s goalie makes during the game a tree will be planted as part of the Million Tree Challenge, a community-wide project with the focus of planting one million more trees for environmental and human health in London, ON. Downtown London, the official game sponsor, has also agreed to match the total and will plant an equal number of trees. Fans at the game are also encouraged to join the Saves for Trees program by sponsoring a tree for $25.00.

The City of London will also be present at the game to promote several initiatives including London’s Clean & Green program which takes place on Earth Day, April 22nd. “The support that we have received from Jay Stanford and his team at the City of London has been tremendous and we look forward to continuing to work with them on many future projects,” said Ohl.

Fans who have been to a Knights game this season may have already noticed one of the biggest Green changes at the venue as all of the in-bowl lights were changed to LED lights this past summer to increase energy efficiency within the facility. 78 – 695 watt LED light bulbs were installed and the savings have been significant! On average, the venue saves 500 kWH per event which is the equivalent of approximately half a month’s usage in a typical Ontario home. While, it isn’t possible to turn down the lights on Feb. 10th, all fans coming to the game are encouraged to do their part by ensuring that they have turned off their lights at home and lowered their thermostat by a degree or two while at the game. To help fans get a head start in reducing energy in their own homes, London Hydro will be handing out LED lightbulbs to patrons at the game.

The Spectra Food Services and Hospitality team at Budweiser Gardens have also taken recent measures to reduce their footprint within the venue to go along with long standing practices such as; composting in the Main Kitchen and 38 luxury suites, providing recyclable or compostable containers at concession stands where possible and ensuring that napkins and other paper products offered to patrons are made from 100% recycled materials.   Recently, Budweiser Gardens partnered with Filta to use two of their services; filtafry and filtabio, which will have a significant reduction on their environmental impact.