Beyond the Western bubble “I just spent my entire grocery budget on food here,” says one of my Western travel writing students. The entire class (two men and 22 female) just finished a tour of Budweiser Gardens, followed by a visit to Covent Garden Market as part of an assignment—a guidebook of London, Ontario.

“I had no idea London had such diversity and amazing food,” she continued, walking away with a bag of treats, licking her fingers.

This is a huge complement coming from a Torontonian and wonderful sentiment to hear as a travel writer and instructor – the goal of travel writing is to open minds and offer new perceptions of the world.

In this respect, I was hoping this assignment would encourage the students to go beyond the “Western bubble” — the ubiquitous phrase that implies students never leave campus, or Richmond Row’s regular spots.

The guidebook assignment consisted of an introduction to the city, followed by four reviews: two amenities of their choice, such as a restaurant or tour – and two reviews from our field trip at the Gardens and Market. Our class is on a Monday during the day so we are often limited to what is open. In the past, when the class was on other weekdays, we’ve toured Eldon House and Museum London, which are closed on Mondays.

This year, we’d try something new. 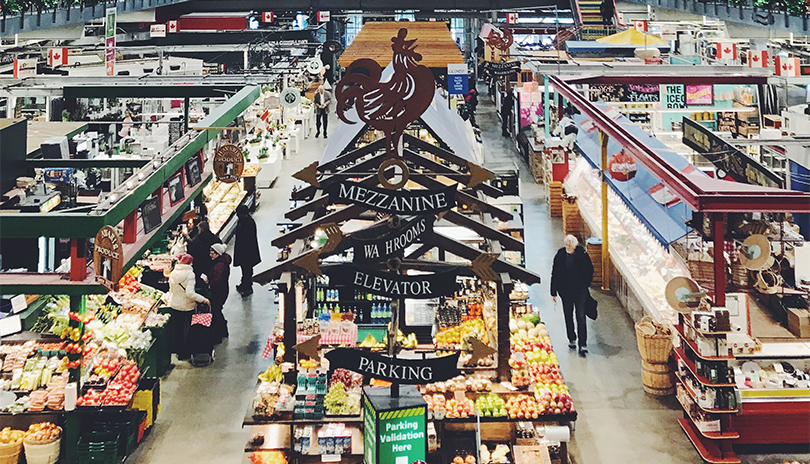 I also wanted to see if this exercise-in-exploration lead to some changes in their perception of the city: did they see their new home differently after researching its history and exploring new areas?

Of the 24 students, only one student is from London—the majority are from Toronto and its suburbs. And before attending the university, 13 had never been to the city before. We all agreed: it’s hard not to compare London to Toronto.

During class, I asked students to write their initial perceptions of the city, before discovering the city.

Others, those from Toronto, couldn’t help but compare the two cities:

“[London is] a less exciting version of Toronto with awful transit and a lot of construction.”

And, some students felt that the city was just a large university town without much else.

After completing the assignments, some opinions changed; others were undeterred.

Reading through their work, it was evident they began to see its charm. Kharissa Edwards acknowledged the homeless situation, but in the same breath, remarked on the city’s’ heart.

“Londoners are a compassionate bunch. An estimated 45.3% of London residents volunteer, many at the city’s 1,800 non-profits and charities. The city still houses the “Meeting Tree” and 275 Thames, two stops for the Underground Railroad, which helped African Americans fleeing slavery in the 1800’s. What’s more, the city recently welcomes 2,400 Syrian refugees and plans to bring in much more. London is quiet yet a welcoming community.”

Others remarked that they were impressed with London’s sense of community, especially when it comes to the Knights’ hockey team. Carly Pews revealed in her research that “with the highest attendance rate of any team in the provincial league, a large portion of the cold out games are held by season ticket holders. On game nights, downtown London is a sea of green.” Students were also impressed with the cheap tickets -- $22 for some seats, in comparison with Toronto’s skyrocketing game prices. “The guidebook project opened London up for me and showed me that there is more culture here,” says Emmy Goodman. That culture also includes London’s distinctive history, and architecture: “it’s a cozy town with some unique places to explore and lots of historical houses that are fascinating.”

Some consider the city, charming: “If you pass by streets such as Regent or St. George, you will be amazed at the grand French inspired houses that will make you daydream of living the perfect small town life.”

London also managed to surprize some of the kids; student Erin Fortune was shocked by the number of festivals: “London’s festivals demonstrate the vibrant but unexpected multiculturalism within it borders. Sunfest Music Festival invites artists from all over the world to preform different types of music, making it the United Nations of Festivals.”

And while some didn’t venture too far beyond the Western bubble, choosing to review The Ceeps and Joe Kools, for example, others went to places such as London’s oldest house, Eldon House, The Banting Museum, Museum London and even The Factory Amusement Park. Jillian Cavuoti ventured all the way to Fanshawe Pioneer Village. “The doors to the buildings are open and stripped of nearly any hint of commercialisation. Walk up the narrow staircases and listen to the floorboards creak eerily beneath your feet. Squeeze into the old school desks and look upon the single blackboard at the head of the room.”

When asked what would draw them back to the city after they’ve graduated, one student yelled out – “Cousin Vinnie’s smoked meat sandwiches!” “Victoria Park,” commented another. “I love this city in the summer—it’s quiet and there’s always a festival going on.”

One of my favourite comments, it might have been the same student that over shopped at the market.

“Bureks were tasty, but Zoran (the owner) was the best part of the booth – we ended up staying for 20 minutes, chatting with him about the chemical makeup of the earth.”

Her comment –which included the owner’s name (a great detail for travel writing), revealed that at the very least, this assignment helped her reconsider the city, outside the Western bubble.